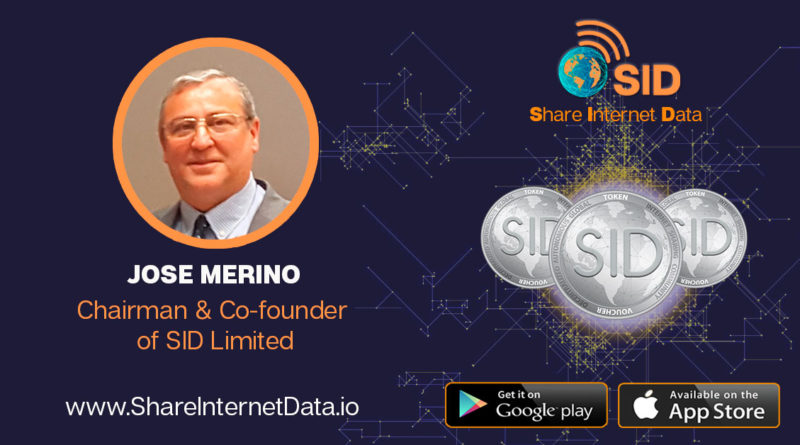 Wireless technologies are technologies that allow wireless data transmission (Bluetooth, Wi-Fi, NFC). The main difference, as the name suggests, is that data is transferred without the presence of a physical medium for transmission (wire, fiber, etc.). It is thanks to this network of the next generation (after 4G) they promise to become much faster than the usual data transmission via fiber. To all, special convenience is the absence of any kind of wires. With the development of portable electronics, compact technology, the Internet of things, wireless technologies are gaining increasing popularity, new data protocols are being developed.

They surround and help to facilitate our life. So let’s figure out what it is and what varieties are found. Today our interview will be with Chairman of SID Limited, Jose Merino and SID Limited Board Advisor Simon Cocking

– You said that you had developed and patented the technology of SID (Share Internet Data), through which the Internet is exchanged between smartphones. Tell me, how did you get this idea?

– Hi Viktor, first of all thanks for having me in your interview short list. The original idea of sharing internet between smartphones was back in 2015 when I wrote a US filed patent on how to share internet between nearby devices. As my background was in Telecoms since the early 80´s and having developed in multinationals, like Alcatel and Philips Consumer Communications, wireless terminal and base-stations as well as mobile phones, it was a natural evolution. By end 2017 I had filed for a new patent, which included all that we had learned during our product development phase that started in December 2016 under the name Frinwo and which we evolved to become more transparent in what we really are about, namely Share Internet Data or SID for short.

– Wi-Fi is a WLAN network based on the IEEE 802.11 standard. WLAN networks operate with a larger radius than others. At what distance is the SID technology available between the participants?

– Actually, the SID technology is not sharing internet originated by Wi-Fi but actually shares also Mobile data originated internet. There are 3 ways SID can get internet:

Wi-Fi which was entered by one SID users to the SID network and which all SID users can connect to in order to get free internet.

Private SID user home Wi-Fi if enter by the owner it becomes accessible directly by all other SID users OR not entered into the SID system to maintain full privacy on its internal Wi-Fi home network and then can still be accessed but only through the SID owner´s smartphone sharing internet through his smartphone.

– You are talking about the global coverage of the Internet, you may need a wider range of action. How does SID plan to cope with the scale of the project?

– The amazing thing about SID is that the system is in fact a fully decentralized system where APPs in the smartphones could function even if the servers are not reachable temporally or even  down completely for a certain period. SID APPs will autonomously share internet between nearby devices AND the choice if a smartphone is allowed to be an internet source to share to other SID users is strictly and only a settings choice of the SID smartphone user itself. That is the ultimate definition of decentralization ,where even if the servers are down the SID service keeps working and the control is only in the hands of SID users themselves if they share internet or not. Anyone can actually download the SID APPs for Android or iPhone through our website on www.ShareInternetData.io

– Now the cryptocurrency is very popular, you are announcing at the end of the year the release of crypto-tokens, which you can exchange for a mega-byte. Will it be a crypto currency for use within the network or will it be implemented on the exchange?

– This is a good question indeed! First of all let´s go back in time and understand why SID is using a blockchain in the first place, not by choice but by necessity. Were it not for the blockchain the SID project could not reached his true potential AND definitely could not make true in future on his Company mission, namely “To lift as many people as possible out of poverty by giving the less fortunate a means to access basic internet connectivity for free”.

What we found is that Mobile data users, were not willing to share their mobile data despite the fact that many of them would loose the un-used and paid for internet Megabytes at the end of each month. Same applied for home Wi-Fi users.

So we needed a micropayment system that current banks and credit card companies are not offering, namely to pay the equivalent of $1 cent for 10 Mega-Bytes of mobile data on average and that at mass scale.

So after a feasibility phase we concluded that we needed to develop our own blockchain or find an existing one that can do mass transactions in terms of volume and confirm a transaction in seconds and handle equivalent of $1 cent value in fiat or Tokens and the blockchain that came out ticking all our boxes was Stellar. So several weeks ago SID already created the SID Tokens and started the only missing part, namely the trading of SID Tokens for Mega-Bytes of internet.

As for your reference to when, well today users can already use the SID system but they can´t trade tokens AND this is important to us that it´s transparent and again decentralized and not in the hands of anyone, not even SID. So the activation of the trading or payment by Tokens for internet will be after the future Token sale is completed and the SID Tokens have been formally quoted on public exchange(s).

As for the company mission, SID will allow in future users who can´t afford to pay even $1 cent to consume Ads through our SID APPs. These users will than get instant SID Tokens from SID form the company pool such that they can immediately start paying for internet shared by other SID nearby smartphones with those SID Tokens they got for free, be it consuming Ads. SID will than, with the amount it gets paid by the Ads companies minus expenses, buy in bulk SID Tokens from public exchanges to put those back into the Company token pool. This in turn is expected to create more liquidity in line with the growth of consumed Ads.

– SID technology was successfully implemented in a joint project with the company Dunkin Donuts. With which companies are you currently negotiating the integration of SID powered by Frinwo (SID technology based on SID´s R&D centre Frinwo)?

– That was an amazing SID use case of which we are so proud about. Originally back in the second half of 2017 the reason we looked at companies like Dunkin Donut´s franchise for Spain, called Dunkin Coffee, was to evaluate if our SID eco-system was robust enough for mass deployment. After several months of development and testing the integration of the SID technology, powered by Frinwo, was successfully implemented inside the APP of Dunkin Coffee. Actually, Viktor your news website was one of the first that broke that press release to the public in a joint press release by SID – Dunkin Coffee – LDJ Capital´s David Drake and Board Advisor of SID Limited. That resulted in 91 thousand active APP users which definitely qualifies that our SID infrastructure was ready for mass adoption.

We are at the moment negotiating with a company that owns a mix of several high-way restaurants and gas stations to integrate SID inside their APP to improve internet connectivity to their users AND at the same time function as internet sources to users of the SID APPs. When we conclude the negotiations and get approval for a joint press release we will definitely let you know.

– The SID team has extensive experience in the field of technology and telecommunications. Will there be new developments in the near future?

– Although not intentional the SID team turned out to be just amazing with a great mix of talents but also with more than 8 different nationalities AND we are proud to have 2 women in our operations team and 1 woman on our Board Advisory. Our dynamic team will evolve over time for sure as nothing is static in this fast moving industry. – You join SID-Board Advisory, how would you assess the importance of SID technology? And is there an application on your mobile phone?

– The reason I joined SID´s Board Advisory was three fold, first because they had a product already released to end-users which I could download on my smartphone and secondly the company mission of “helping the needed” which is giving something back to society was close to my heart and third and lastly because of the composition of the team with a great mix of experiences from software to multinational exec experience which is needed in a start-up.

– You are a journalist, writing about technology and about crypto currency, what are your predictions about SID’s intentions to issue a crypto token? And what you give advice to Jose Merino in his work?

– The modest advice I give is in my field of expertise, on what to avoid just as much as on what worked in my experience as Board Advisor on many past ICOs. Occasionally a simple motivational Skype talk as I had with Jose of almost 40 minutes also helps. Now that paid crypto Ads are banned by almost all mainstream traditional online services, I feel a lot more weight on my shoulders from the companies I Advice, and SID is no exception. Jose Merino of SID does keep regular communications with me specifically on promoting or publishing the material the SID team prepared for the Whitelist phase on www.ShareInternetData.io and I except this only to intensify during the up and I expect this only to intensify during the up and coming actual ICO Token sale phase.

Thanks for the interview.

It was a pleasure to be interviewed by you and I hope your “CryptoCapitalNews.com” readers will enjoy it!