The world does not stand still, everything changes. we live in times of great innovation. Robotic technology, artificial intelligence and digital currency continue tirelessly to change our worldview. To clarify a bit how the digital currency is organized and what is the world of cryptography, today we will talk with the chief researcher Blockchainsmokers and Dean of Blockchain Technologies at the Exosphere Academy Anish Mohammed.

-As you know, higher mathematics is an enigmatic and at the same time fascinating world, it shows that geniuses do not become – geniuses are born. Ever since you were a child, was it easy with math?

– I shall admit that I am not a genius, at the same time , I did have interest in mathematics from an younger age, it might have more to do with parents being physicist and engineer, than anything else.

-Mathematical analysis is very complex and requires tremendous knowledge. Many large companies and corporations invite specialists at the stage of project launch. With whom did you work as a specialist?

– Again, i am not a traditional mathematician, I have worked among other things as medical doctor, bioinformatician, cryptographer, strategy consultant, venture capitalist and in retail banking. In general my job is more closer to security architecture these days than to doing pure protocol or cryptography research. I end up working with a spectrum of folks, all the way from founders to folks who design protocols. This depends on when in a project i am engaged and how much of hardcore crypto is involved.

– You are engaged in more than 18 years in the field of cryptography, you are investigating algorithms and protocols, you had to work at the stage of launching a crypto currency and what is this coin?

– I have been involved in building a micropayment system 18 years ago, I havent designed a coin of my own. I shall admit to having been an advisor to Ripple Labs for the past 4 years and being part of Ethereum larger Swarm research team. Again in the case of Ripple, mostly on security aspects of protocols and in case of Swarm at incentivisation protocols. I have most recently been involved in looking at Ocean protocol. So far I havent launched a coin of my own :).

-Having such experience, you did not have a desire to create a crypto coin yourself?

– I shall admit to not having thought of creating a coin myself. Creating something successful goes beyond expertise in cryptography, security or technology. It involves in being a master communicator and being able to take people along on a journey. I am not sure I have such evangelical qualities yet.

– Many coins appear and disappear. What are the difficulties faced by the creators in the process of the life of the coin and what causes them to leave the market?

– Coins in general , in the manner of speaking in ICO world, there longevity is mostly decided by the true utility function of the coin. We could combine this mass adoption, plus support of the exchanges so that the liquidity remains. In addition the Cryptoeconomic characteristics of the ecosystem which creates a smooth demand curve.

– Everyone knows that Bitcoin was invented by Satoshi Nakamoto, do you think this is one person or a group of developers? Could one person do this?

– It’s a pretty hard question to answer. We could never easily predict what all skill sets one could have. The rarer the skills, mathematically speaking the lower chances are that you would find someone with all the skills required. If this is the criterion used , then it is likely that Satoshi is a group, but as we known in nature, rarely lighting does strikes twice, so it could be a single person too, but with very low probability.

– What is the value of Bitcoin, why is it becoming more expensive? Your forecast up to what mark Bitcoin may rise in price?

– Going by the basic economic principles anything which has limited supply and very high demand, the price will go up. This is true of most scarce resources ,e.g. gold, diamonds. In general this has nothing to do with inherent utility function of the object. It would be pretty hard to predict something like that, so I shall admit failure. In the next year it would surely cross 10k barrier.

– How far you can go in the field of cryptography. What new inventions can we see in the near future?

– Inventions in cryptography always happen, the most exiting ones from a few perspectives:

– What kind of global projects are you currently working on?

– I work in general on zeroknowledge protocols, verification of smart contracts , scaling problems from security perspective, have couple of projects looking at identity

Thank Anish for the interview 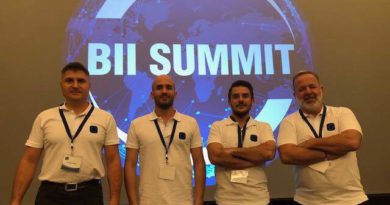 Natalia Ameline and Elena Sinelnikova: We are announcing the hackathon on the blockchain for women